You are here : Home> The Somme inter-town network – Trans’80 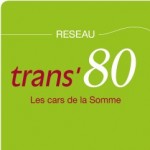 Trans’80 is an inter-town network whose coaches cover most of the Somme department. With its 56 lines serving some 600 municipalities, the network is one of the largest in the Hauts-de-France region and facilitates the daily life of many passengers, for work, school and leisure journeys.
Presentation of the Trans’80 network
Mainly operated by the Transdev and RATP Dev groups, the Somme inter-town network plays an important role in the department. The coaches operated travel along the roads of the Somme, but also run to the municipalities of three neighbouring departments, making journeys easier for passengers. The network has been under the authority of the Hauts-de-France Region since 2017.
Trans’80 inter-town lines
No less than 56 lines cover most of the area of the Somme from Fort-Mahon-Plage to Ham via Abbeville and Amiens. In response to the population's requests, some lines run on market days to facilitate journeys for people who do not have their own vehicle or do not want to use it. Some municipalities bordering on the Somme department are also served. This is in particular the case for the municipalities of Hesdin in the Pas-de-Calais department, Grandvilliers in the Oise department and Saint-Quentin in the Aisne department.
The Trans’80 lines booked for school transport
The coach network transports primary school, middle school and high school pupils attending schools in the Somme, in a municipality other than their place of residence. Some specialised Trans’80 coaches are operated to allow pupils with disabilities to travel to their schools. Pupils simply need to show their ticket to travel on buses in the network.
Towns served by Trans’80
In the western part of the Somme, coaches serve many coastal towns, such as Cayeux-sur-Mer, Saint-Quentin-en-Tourmont and Mers-le-Bains. In the northern part of the department, the towns of Nampont-Saint-Martin, Ponches-Estruval, Doullens and Authie are for example departures or termini of various lines. In the south, coaches stop in the towns of Blangy-sur-Bresle, Aumale and Montidier. Finally, Abbeville and Amiens are the two focal points centrally located in the department.
The Trans’80 main lines
The main lines of the Trans’80 network run through the centre of the two largest towns in the department: Amiens and Abbeville. Line 717 also provides a rapid connection between these two major towns. The lines departing from Abbeville towards the sea are lines 710 to Fort-Mahon-Plage, 711 to Saint-Quentin-en-Tourmont, 706 to Cayeux-sur-Mer and 702 or 732 to Mers-les-Bains. From Amiens, line 737 takes passengers to Albert, where they can take a train to Lille. The towns of Doulens, Péronne and Albert are also major points in the network.
Trans’80 fares
The company offers several fare schedules according to the needs of its users. School transport is generally free, or paid for by municipalities with a small amount to be paid by families. Monthly season tickets allow the department's population to benefit from advantageous fares over the entire network.
Trans’80 is part of the daily life of several thousand users through its extensive network and preferential fares that allow everyone to use the company's coaches.

Région Hauts-de-France
Direction des transports scolaires et interurbains
Département de la Somme
11 Mail Albert 1er
CS 42616
80026 AMIENS CEDEX
↑
V2.21.11
Passpass.fr uses cookies to provide you with a quality user experience, measure the audience, and optimize the features offered.
By continuing to browse this site, you accept the use of cookies under the conditions provided for in our legal notices.   More details   Accept Refuse